/make/ is a catch-all board for all creative hobbies, including but not limited to; art, writing, programming, game development, handicrafts...

You are free to make new threads for projects that you're working on. You can also do so for a concept or an idea, as long as you take it seriously and/or have some kind of plan to create it at some point. For other disconnected ideas, use the ideas thread. 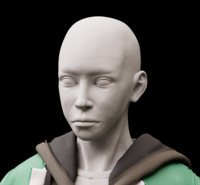 Post your digital art here, be it 2D or 3D. I'm currently working on this character for a future piece. In the end, she will be an android in a cyberpunk setting waiting for the bus.

prove to me that hardwork matters more than talent or luck or personality or chances.

Tool that lets you extract .gif animations out of videos. There's still a bunch of weird behavior and things missing, for example text fields wrap in a weird way if there's too much text. None of the problems are trivial to fix and I want to take a break from this project, everything should work fine though. Post ITT for problems or ideas for what I should add/change. Windows only for now. I need to port my OS file into Linux, it might be a while before I do that so I wanted to release this sooner than later. https://tsun.itch.io/easyvideocrop

Ideas and thoughts about other things not worth their own thread.

There is a concept that's been hovering around for a while, but seemingly nobody has made a serious attempt at it. That is, a desktop client that can read imageboards. There's a lot of advantages to this, but you can take it a step further and reach a whole another level by also making a server that's designed to co-operate with the client. This thread is for me ideaguying and probably posting actual progress on such a system (from here out named NIBS for "N-ImageBoard System"). NIBS is 2 different things, a desktop client for browsing imageboards, and an imageboard server that's designed for the client. The basic idea behind it's operation is that whenever you get information from the server, you cache it locally on your computer, and when you view a page it's loaded from the cache, and you only ask the server if anything has happened after that. This results in colossal speed gains for the user and bandwidth savings for the server, the experience is better for the user and the server costs are much lower for the owner. The auto-update system will also be able to tell you everything about every thread/board you have open/watched across the entire webring, instantly as soon as something happens anywhere. By default, NIBS imageboards will be impossible to access directly from a web browser, and the NIBS client can't directly access traditional website imageboards. Instead both the NIBS client and server will be split into 2 parts; one for the NIBS core system, and another optional "plugin" that can translate to/from web protocols. The plugins will allow the NIBS client to read traditional imageboards, and the NIBS server to be accessible from a web browser like any other imageboard (some features will be disabled however because web browsers can't do certain things that NIBS client can, and traditional servers don't support certain NIBS server features). On the server side, this also allows you to detach the imageboard from the web by removing the plugin, thus only people with the NIBS client can access it. NIBS will have a "webring" by design, in fact the whole system revolves around a webring-like operation. It works similarly to the current webring except servers only store links to other imageboards, they don't share board lists. Instead the user's client will retrieve all the board data from all the different servers, and stores them locally. It will also be able to include the current webring boards. Pic related is a shitty graph that attempts to roughly describe how NIBS server and client communicate and how the "web plugins" play in. (just replace "NC" with "NIBS") Nchan ( >>4 ) will likely be "cancelled" and replaced with NIBS (that's where the N comes from). The web translator plugin should eventually be able to provide a website that basically looks like Nchan anyway though. However finishing NIBS will take a much longer time than it would to finish Nchan. NIBS is the true true thing I've really want to make, more so than a normal imageboard, and more so than just a handmade server. I just didn't have enough understanding of networking to think about this seriously. TL;DR A desktop program for browsing imageboards. A new imageboard engine. A completely new model of operating which has huge advantages.

Nchan (temporary name) is my imageboard engine project. The goal is to do basic shit that we should've been doing ages ago, like browsing threads by tag, supporting all file types, using .webp thumbnails for compressed animation and transparency (including apng), making nojs posting super comfy, not having a clunky inconsistent pile of garbage UI, and having more/better post formatting options.

It currently runs on node.js, though I'm planning to eventually rewrite as much of it as possible as C++ modules (basically everything except the initial request redirecting).

It may not be finished for a while because I'm not good at designing/using databases. Technically most of it already works though.

I often try to design something like the UI for a program or a game, or maybe typeset a manga, but struggle to do it because a program that is "decent", "free", and "image editor" at the same time doesn't exist. Gimp as a whole is a clumsy piece of shit, Krita devs seems to have no intention of ever fixing their broken ass text tool, MS Paint simply crashes if I try to draw a text box, many others have either no text tool at all or are severely lacking in other ways. I could write a book about all the ways that every single image editor is a pile of shit, but I can't pray and wait forever for one of them to get fixed so I think I just need to bite the bullet and prioritize making it myself. There's 2 I have already thought about in the past, one of which is just a simplified and stripped down version of the other, meant to replace MS Paint, pic related. I doubt I'll be properly making either one for a while, but I want to at least start on an image editor of some kind so I can design things. Making an image editor isn't actually hard at all, it's only hard to add certain features like magnetic selections and weird filters and support for all the file types, and making the rendering fast when you use large brushes on a large canvas and such. But for now I just need a simple editor that can draw basic shapes and text, paste images, and cut/paste selections.

Tell me what to do with it. QUACK

Hey /make/ friend, I noticed you're pretty good at your 3D stuff, how about coming and joining us over at https://anon.cafe/icup/ to get your board advertised with a team?